Connecting private donors and initiators, with transparency and control

SUSTINOVA Connect is a pilot project we started in December 2014, together with private donors who donate more regularly and in higher amounts but were dissatisfied with the current fundraising system.
During our initial discussions, we heard how the effort in making the donations and managing the subsequent contacts by NGOs (mailings, phone calls and so on) often became a burden and a source of dissatisfaction for the donors. In addition, there were questions about how personal data is handled and secured.

Our goals with SUSTINOVA Connect are twofold:

For SUSTINOVA, this project matches our overall goal of supporting the community with concrete solutions that promote good practices and good organisations. In addition, we can integrate these issues into the approach used to assess organisations that might receive direct financial support from SUSTINOVA.

During the pilot phase, three funding rounds were conducted: in 2015, 2016 and 2017. After transferring the designated funds, we invited each NGO to undergo our vetting process. The data and feedback collected were then used to discuss with the donors and improve the overall process.

Each funding round contained a mix of pre-selected organisations and others that resulted from additional research and discussion with the donors. In each turn, SUSTINOVA channeled financial support as unrestricted funds to 40 organisations based in Switzerland and active in various topics, both locally and abroad. The charts below show the distribution of the funds across the different topics. Please note that, according to SUSTINOVA’s classification procedure, the same NGO might be marked in more than one topic if more than 25% of their budgeted project expenses is allotted to it. 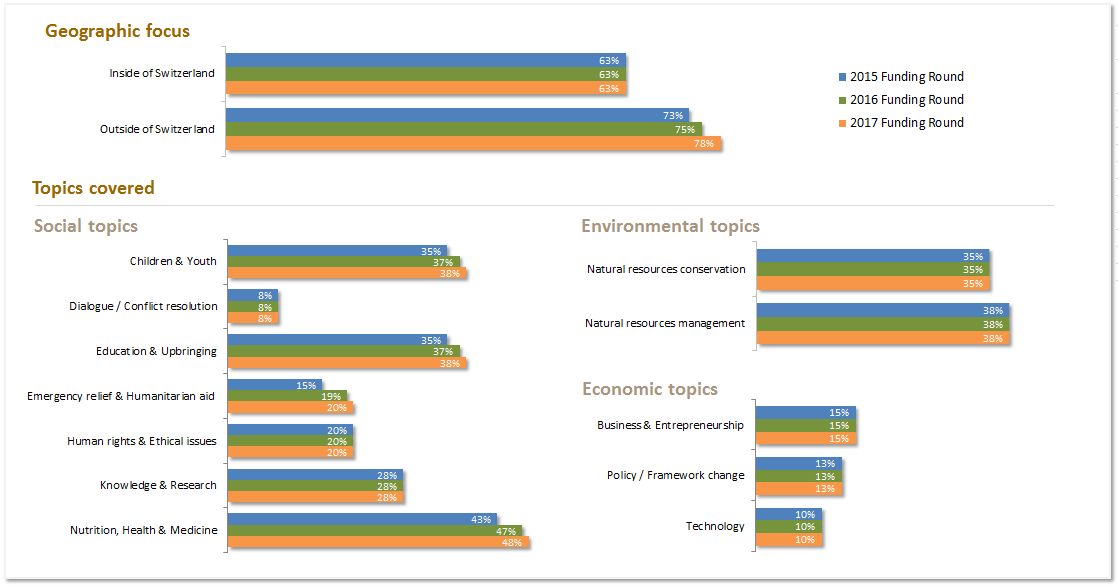 15 out of the 40 organisations went through the vetting process: 14 were approved with an adequate or good level of practices; one was rejected due to its excessive reliance on external providers (due to budget constraints).

General guidelines concerning the use of data: